You are here:  Home > Blog > Why a Keepster Book Makes for a Fun Bachelorette Party Gift, Even When COVID Crashes It

Why a Keepster Book Makes for a Fun Bachelorette Party Gift, Even When COVID Crashes It

I decided to turn the texts, chats and photos that captured my best friend’s virtual bachelorette and bridal experience into a custom Keepster book: a professionally printed, friendship keepsake book filled with the messages and memories from a truly unforgettable time. 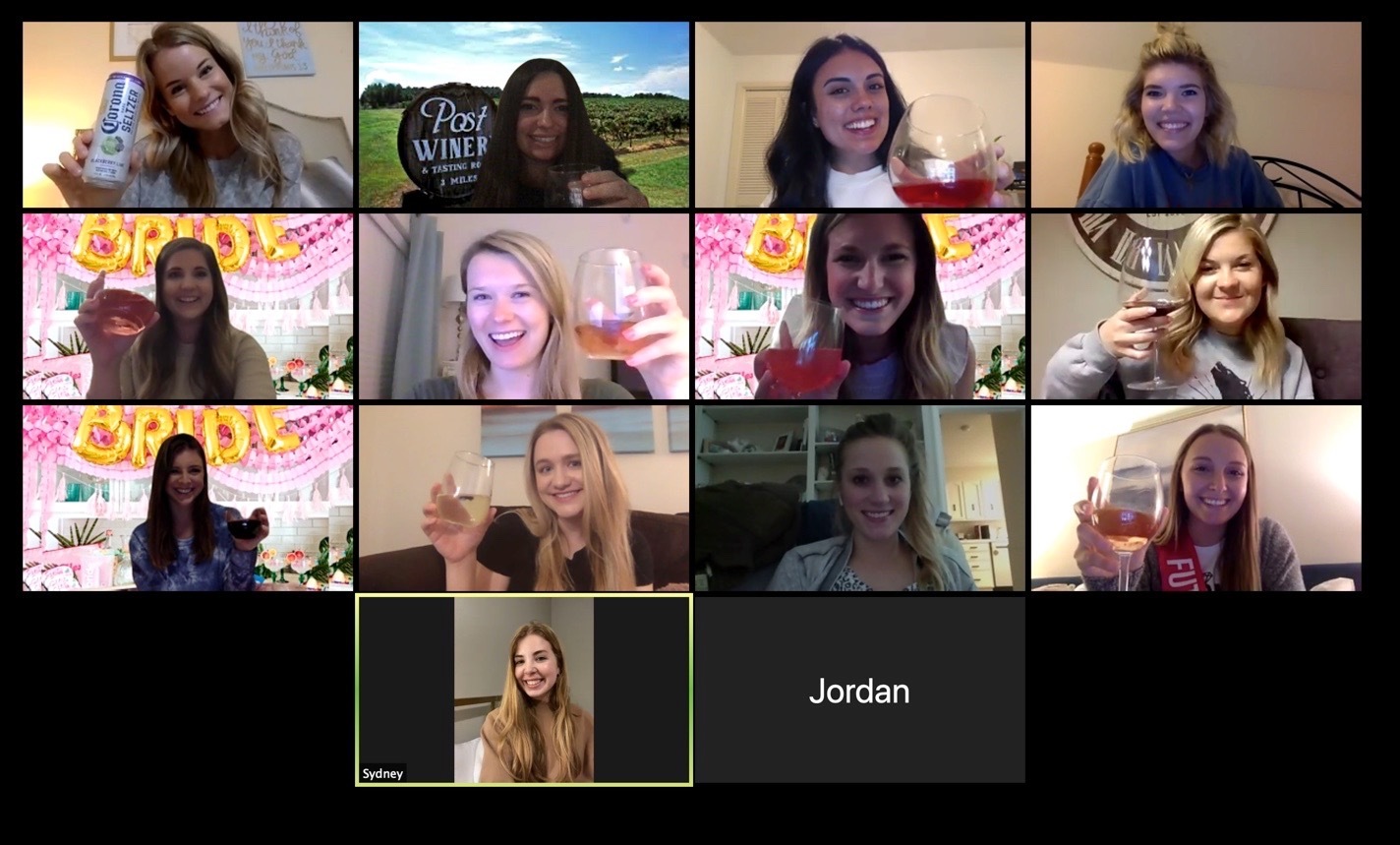 My best friend was planning to marry her high school sweetheart in front of 150 nearest and dearests, on a sunny Spring day. Her mom hoped to host a beautiful shower. I planned to throw one wild bachelorette party. We had months of celebrations to look forward to.

COVID had other plans.

Addy has Crohn’s disease - planting her firmly in the high-risk category for COVID-19. The immuno-suppressants she takes to keep her disease at bay forces her to live her life with the hyper-vigilance and caution that most of us are struggling with right now. Needless to say, when news of this insidious virus broke, Addy knew the level of caution she’d need to maintain in the months ahead. She couldn’t risk unnecessary exposure. That meant canceling her bridal shower, bachelorette party, and wedding.

Addy had openly spent years dreaming of her fairytale wedding since the sixth grade.

I’d literally been planning her bachelorette party since we binge-watched Bridesmaids at sixteen. She’d started a separate savings account for her one-day wedding at eighteen, and had the entire day pinned out a la Pinterest before Matt, her high school sweetheart, would even get down on his knee. Last year, he popped the question by a lake in our hometown, and surprised her with an engagement party packed to the rafters with her favorite people.
She was over the moon.

When they moved across the country for work, Addy and Matt hoped that their 2020 wedding celebrations would be the most joy-filled reunions, the perfect reason for everyone they knew to splurge plane tickets - in the name of love and matrimony.

They’d picked a date that fell perfectly within their timeline - they needed to get legally married for insurance reasons. Anyway, after a decade together, it was about time. April 17th, 2020.
It was going to be the best day ever!

For the last year, we’ve talked about all things wedding. Even though I couldn’t afford to be with her physically for most of the planning, Addy made sure to make me and all of her bridesmaids feel involved. We started a group text to communicate constantly, a collective countdown until we could celebrate together! Thanks to modern-day technology, I felt like I got to witness it all. Addy texted pictures of wildflower bouquets, flower girl dresses, tiered cake options nearly nonstop, wanting us all to share in her happiness. She FaceTimed me from the second-hand bridal boutique she’d found, so I could weigh in and be right there with her as she tried on the dress of her dreams. She was over the moon.

When it came down to it, Addy didn’t think twice to cancel their plans. She knew nothing mattered more than keeping everyone safe and healthy...it was a no brainer. People were experiencing unthinkable tragedies, loss, fear… Addy insisted that missing out on having her much dreamed of bridal experience was hardly something to complain about. She was right.  We all knew it, but the reality that my dear, sweet best friend’s special celebrations could no longer take place in the way that we’d imagined since grade school didn’t sit right.

The day that Addy told us in our group chat that she’d be canceling, a separate, new group chat came alive. We named it Bride Squad...and we sprung into action. 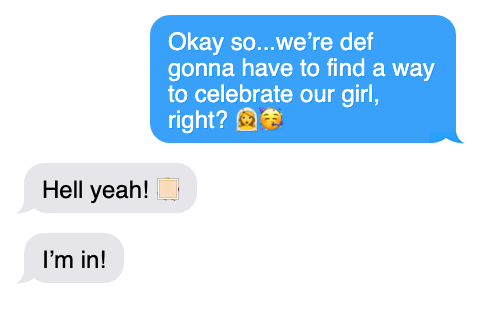 My phone buzzed to life with a smattering of pings, dings, and emojis. Bride squad, assemble!  147 texts later, we decided. This global pandemic wasn’t going to stop us from celebrating our bride-to-be. Enter modern technology and a few rush-ordered Etsy items. Planning for a surprise virtual bachelorette bash had started!

That group text was like the meeting of the minds on steroids. I’d wake up to 25 texts, each one more and more hilarious until finally, we’ picked a date, coordinated with her fiance for the ultimate surprise, and shipped her a box of wildly inappropriate props with clear instructions: DO NOT OPEN UNTIL JULY 12.

Okay, so we couldn’t be together but we could still wrap ourselves up in hot pink boas, pour a hefty drink (or two), charge up our computers, and rock our custom t-shirts. Oh yeah, we went for it! ADD’YS BACH BASH, 2020. We joked that maybe those flimsy tee’s would be the only happy reference to 2020 in the future, when we’d combed through our closets one day….

We each decorated a wall in our apartment or family homes, some girls even daring to hang X-rated streamers while their parents puttered around downstairs. 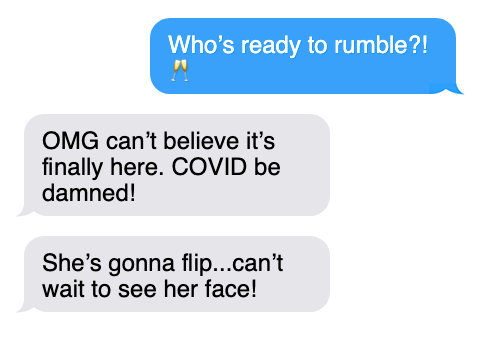 The day of, we had Matt tape up the box of streamers we’d sent, toss a few blown up balloons around, and present her with the “I’m the Bride!” t-shirt we’d ordered.

Matt set Addy’s end of the video conference up before he went to go get her, and as each of us crammed our faces into screens - giddy with excitement. Who knew you could muster up such emotion via Zoom?

We’d thrown ourselves into planning something special for someone so special, during a time when nothing made sense, and everything felt really, really dark. At first, planning something so celebratory and let’s face it, non-essential felt...well..gross. People were suffering in ways most of us couldn’t comprehend, and we were hunting out Ring Pops and streamers?

Weirdly though, having something joyful and positive - planned entirely for someone else - felt cathartic. What had started as a cute idea had grown into our own sort of therapy.

One night, after sending dozens of texts back and forth over the selection of raunchy headbands and our favorite Addy / Matt moment, we decided it felt pretty awesome to be doing everything we could think of to put a smile on someone’s face, especially now.

Whenever one of us would start to dooms scroll or panic, it's like our group text had this sixth sense - it would start to flood through with a thread of updates, jokes, potential ideas, all of it. It felt like we had this common goal - small ball, as it was - and that could be where our attention went.

So, as Addy stepped into the room, wearing her bride shirt and boa, a look of true surprise and total bewilderment plastered onto her face, I knew. We’d done a cool thing. As she took it all in: the decorations, the flowers, the Cooks, the Brady Bunch screen of bridesmaid, she burst into tears. Happy, tears. We chorused together: “ADDDDDY!” so loud and gleefully our computer audio cracked against the strain.

That night was pretty perfect, as virtual bachelorette parties go. We spent it blasting the same song and dancing together - miles apart - making cheesy toasts, and reminiscing on our very favorite moments with our beloved bride-to-be. We teased, talked, scream-sang, laughed...it was hands down the most fun any of us had had in so, so long. Addy just kept saying: “I can’t believe you guys did all this. For me!? Now?! What!”

I finally crawled into bed at 2 am - my cheeks sore from laughing for the first time in what felt like months - thanking the technology gods for letting her surprise bachelorette party go off without a hitch - err, glitch. Addy texted me before my head could hit the pillow: 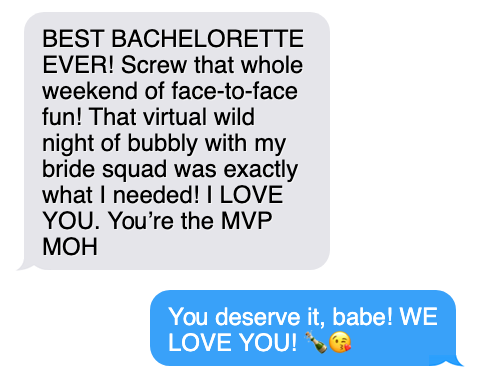 I’ll be the first to say it: I’d thought our bride squad duties would include an over the top bachelorette trip, dancing together on sticky tables and gorging ourselves on overpriced brunches. We’d thought we’d celebrate our girl for days on end, rallying together to give her the most unforgettable time of her life. We thought we’d wear raunchy headbands and link arms, leaving a trail of hot pink boa feathers in our wake.

We didn’t need to do any of that to truly celebrate life, love, and our girl, Addy. We just needed a video connection, a group chat, and each other. So, I decided to turn the texts, chats, and photos that captured it all into a custom Keepster chat book. I’d seen an ad on Facebook and absolutely had to try it. I saw the hot pink book in the ad, with the bride and her best friends on the cover and knew it was exactly what our virtual bridal experience needed. It was easy, it was fun, and turns out much more than a party favor, it was the perfect keepsake and gift. 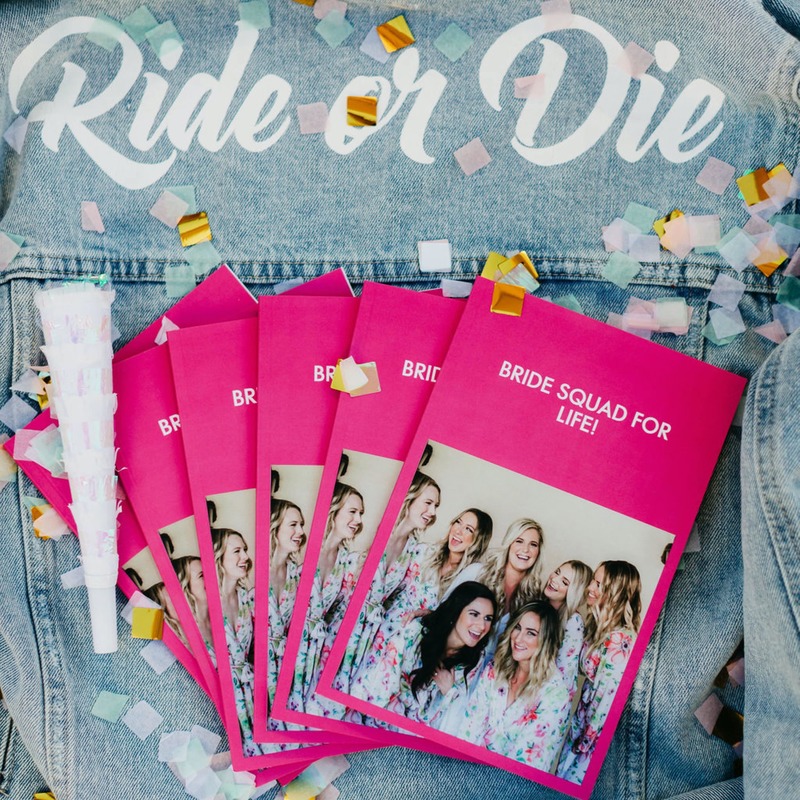 In the end, I’m here to tell you: even if it feels silly or weird...there is still a lot worth celebrating..and while it might look different, it deserves to be recognized. Maybe now more than ever. 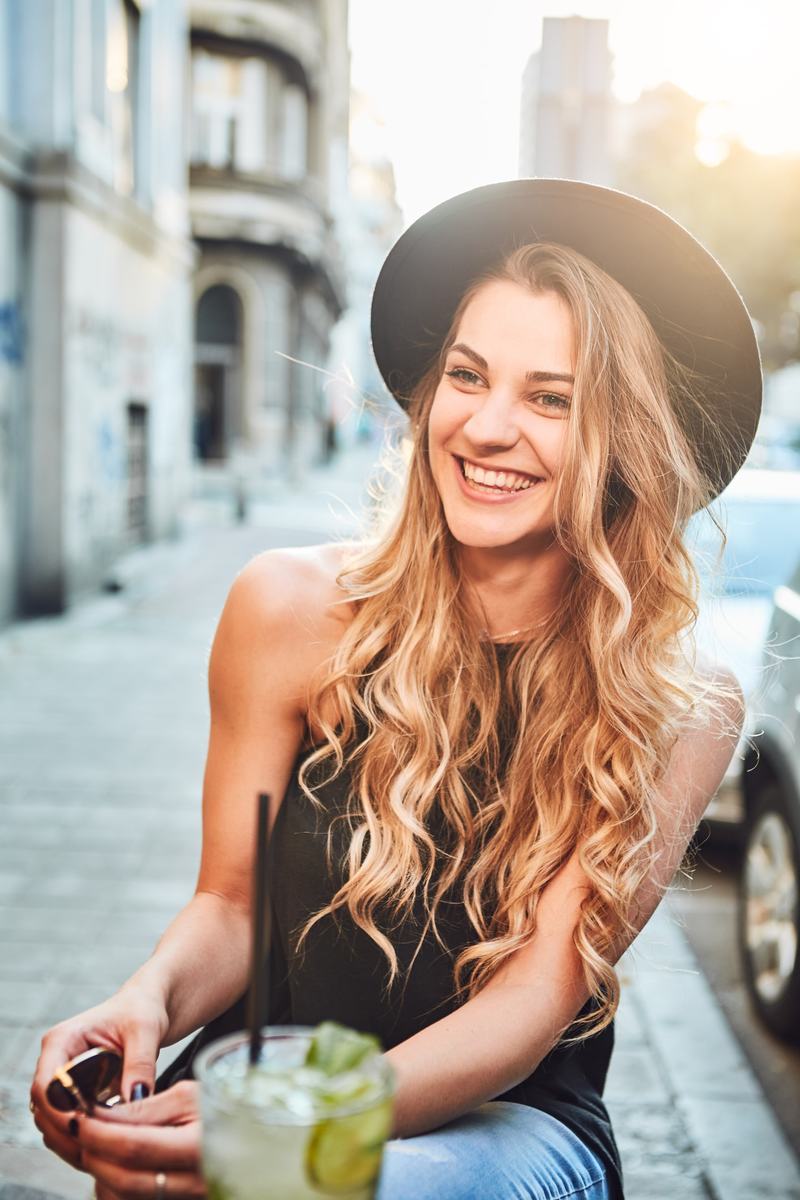