You are here:  Home > Blog > Dating in the Age of Corona

Dating in the Age of Corona 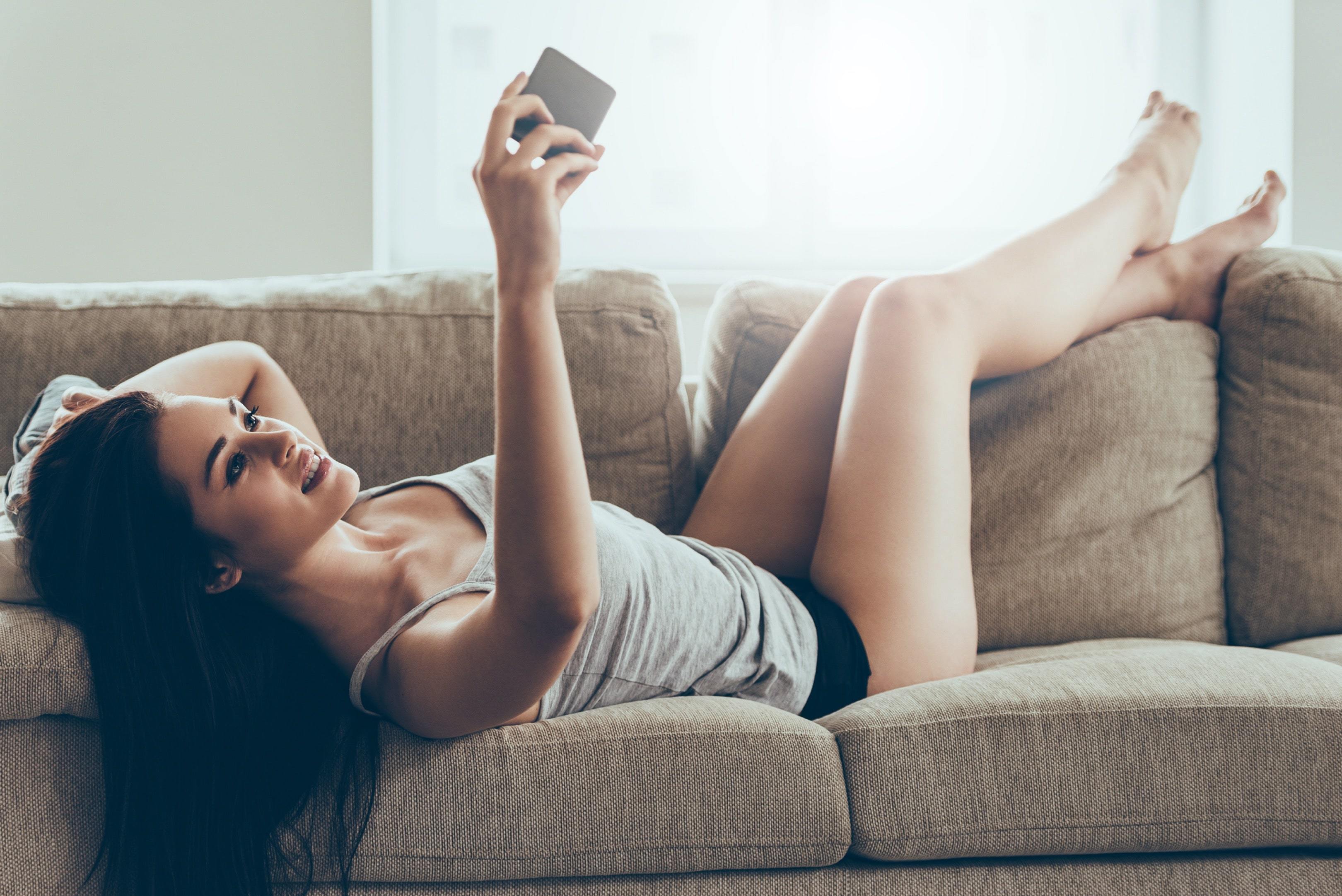 Before COVID-19 flipped the world upside down, I was firmly single. So totally single.

Though so many I knew had sunk into serious monogamy, even matrimony - seemingly after a few months of Tinder-ing, Bumble-ing, messaging. Their stories had started on their screens. I pictured the jokes they’d embarrass their kids with someday:  ”When your Mom used the dancing lady emoji, I knew she was it for me.”

I’m not all that cynical, in fact, I happen to be a fan of love. Big supporter, as my friends can attest. I have a closet full of tulle and a fridge filled with save the date magnets as evidence of / evidencing the success stories...but after eleven months of blundered blind dates and tanking on Tinder.

I began to wonder if dating in the digital age was for me. It seemed that every guy I met wanted one thing, or maybe, everything but one thing: commitment.

In February, I shuffled my mobile home screen to ‘hide’ the dating apps. I joked with friends that after one too many matches with Mr. Wrong - or even, Mr. Right for The Night - I was going to give up dating apps for lent.  I was tired of it. The apps, the effort, the whole shtick/shebang or any other more slangy word  I’d focus on me, myself, and after a few months - emerge from this self-imposed ‘alone time’ of sorts as a more well rounded, career-focused, clear-headed version of myself.

Then, the world hit pause before I could. The movie montage period of me, myself, and I time was no longer a fun self-imposed idea. Instead, it became a privilege - awarded to those fortunate enough to stay home and remain safely employed, during this inconceivable time.

Disclaimer: No one will read this and cry for me. Nor should they. This isn’t a piece penned to pull at any heartstrings, or even push an opinion.

These are simply the musings of one single girl who succumbed to social distancing swiping, only to finally meet Mr...ummm….Maybe?

Cut to me, sitting on my Craigslist couch. For the third time in a week, my three best friends and I have exceeded Zoom’s ‘one hour’ limit imposed on free accounts. We always take it as a sign that the conversation has ended - mid-sentence, mid-thought, and then shift over to group chat to pick up where we left off.

The four of us covered quite a bit of ground in this past week’s calls: Eve had been furloughed from the corporate career she’d dedicated the last 6 years to. Brigette had made the difficult decision to postpone her summer wedding. Rachel and her husband were struggling with their family plans up in the air - fertility treatments put on hold. My friends were hurting, the world was hurting, and there was no ‘end’ date in sight. 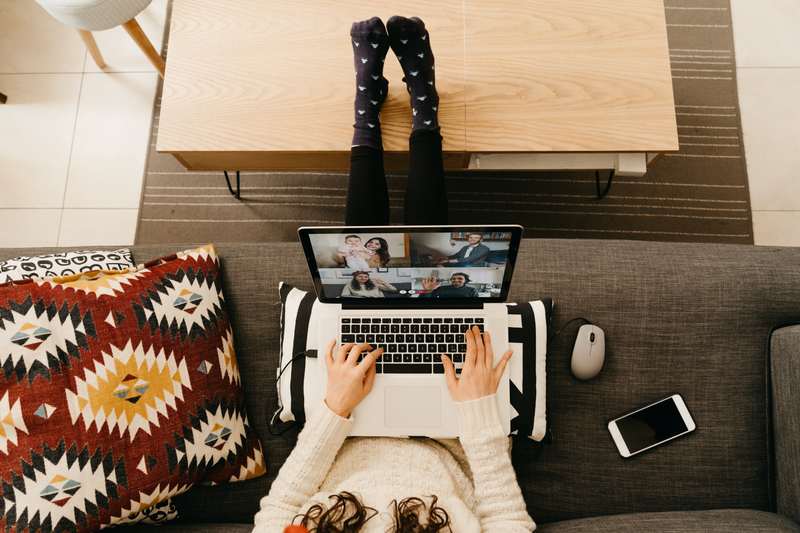 I felt helpless, hands tied, tired: I’d tried to offer humor, heartfelt soothing, all the while knowing my efforts were futile. There wasn’t anything to be said, soothed over, fixed...this was something to ride out, rebuild, and overcome.

Eve brought it up first.

“I’ve been texting with that guy from Bumble again. That one from Pasadena? Our ridiculous schedules have obviously gone out the window so, I figured...why not have a little text fling? Totally shameless I know but honestly, it feels good. We just talk. We literally text all night. It’s ridiculous. I had read this piece on Refinery29 about dating apps during COVID. They’re blowing up because everyone is home, desperate to talk, kill some time, distract themselves - whatever. The pressure is gone - no one expects to hook up tonight or even make some magical connection during a global lockdown, so why not just chat and see where it goes?"

We all praised Eve for her sensibility and outlook on things, and when the connection fell silent I knew the three boxes on my screen were waiting for my usual online dating monologue. They were in for a surprise.

“I finally snagged a thermometer from a shady Amazon supplier. I lost a client but feel pretty hopeful the rest will hold on.”

They nodded in unison, opened their mouths to offer comfort but I interrupted.

“Oh yeah, and I think I met someone. Like, genuinely met someone. Except we haven’t met, not in the slightest, but guys...these TEXTS.”

They’d screamed in delight at the news - bless best friends who even in brokenheartedness, can rally around your moments of happiness - demanding details.

I had logged back into my apps to see: what would these guys have to say when they couldn’t work messages strategically towards the end goal. You know, overpriced margaritas and semi-strings-attached-sex?

Turns out, quite a bit.

I found the message had been sent a few days into our shelter-in-place orders. It had been a week and a half. Jake, a cute USC grad with a husky in his profile picture. 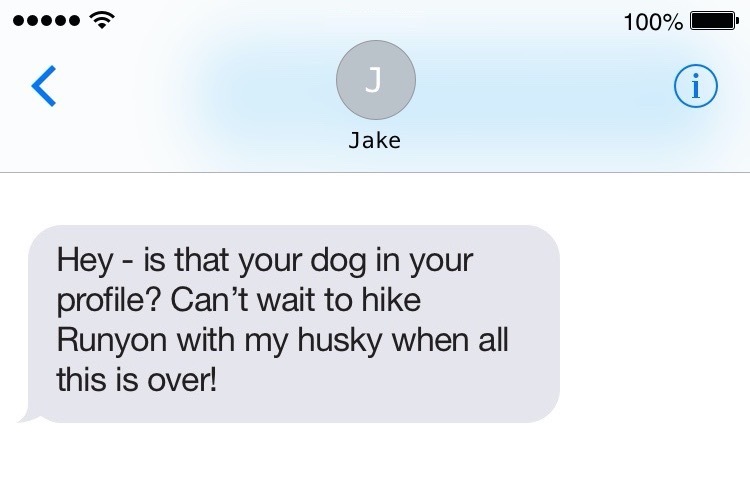 It seemed ... sweet? Maybe because the whole world felt flipped upside down, or maybe because we all needed to confront the demise of ‘life as we knew it’ in past weeks, but that message was one of the most genuine reach outs I’d received on Tinder.

I responded - confirming the Lab mix in my profile was indeed my dog, Luke, and that he was certainly missing his regular Runyon hikes, too. Jake responded less than ten minutes later. 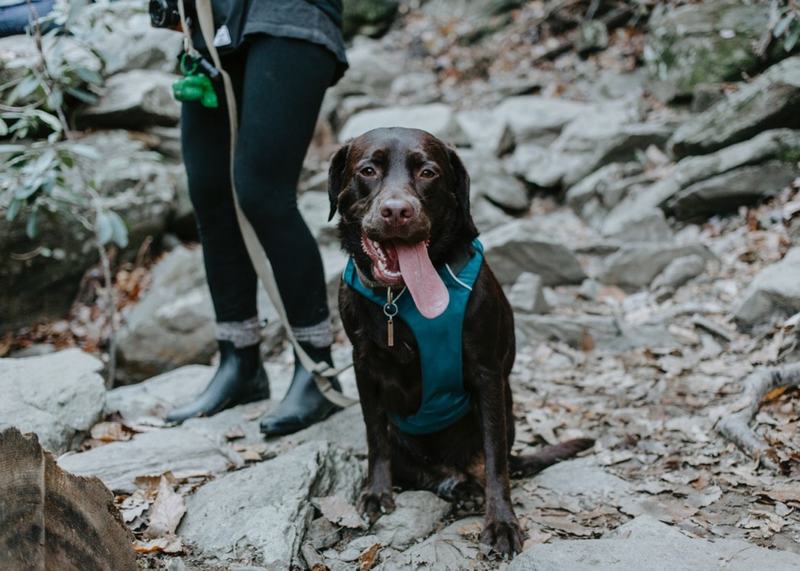 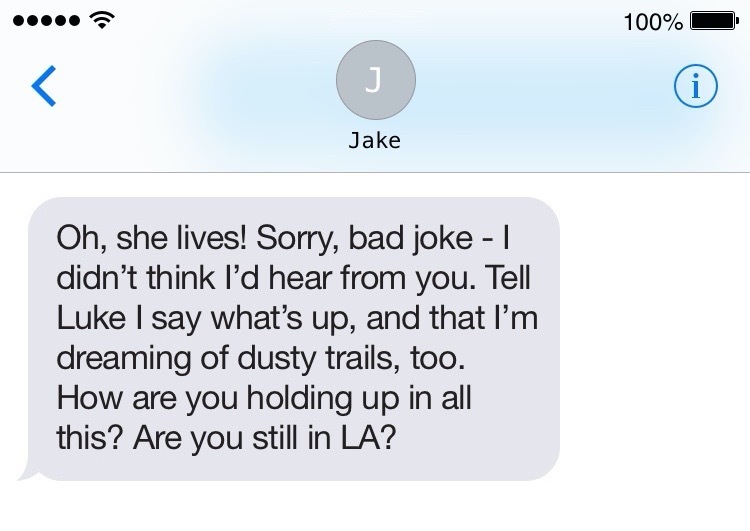 Was this total stranger checking on my well-being? I scrolled through his pictures again. One with what looked to be his niece, a cherub cheeked toddler with his same eyes. One with his dog again, one at his law school graduation, surrounded by family that shared his bright blue eyes and high cheekbones. He seemed...normal. Really, wonderfully, normal.

So that day, we messaged back and forth, and miraculously, Jake seemed fully committed to...conversation. He wasn’t laying the groundwork for tonight, tomorrow night, or even any night. He seemed fully focused on getting to know...me. To my own surprise, 16 messages in, we exchanged numbers.

He texted a few hours later. Our funny, flirty conversation carried on effortlessly - back and forth well into the night. By the time I crawled into bed with a last-minute work assignment and my lab-mix Luke, we’d racked up six hours of texting. Talking. I drifted off with embarrassing visions of couple of hikes and puppy play dates.

I woke up to a text from Jake. I had to laugh. When was the last time I’d felt a rush from just looking at my phone? I’d clearly gone soft, out of practice, a few hours of texting had turned me...like the anxiety, banana bread baking, and impulse purchase of loungewear - this too had to be a symptom of social distancing.

We texted throughout our workdays - covering everything from family to first jobs, last relationships to reality TV. Halfway through day number two of talking - er, texting - I realized this is the most I’d shared with a guy since college.

We weren’t texting the typical: “Wyd?” or even “Nm, u?”. We were penning paragraphs, firing fast-paced questions back and forth, sharing memories over messages as a way to explain our lives, our work, our families, our friends, ourselves to a stranger on the other side of a screen.

I told Eve, Rachel, and Brigette that it felt almost nostalgic, like those early days of a ‘thing’, long before dating apps...when texting was your primary form of communication, even though you’d sit a few desks apart in class. I’m of that strange age where you didn’t go on first dates before logging lengthy logs of texts.

Our phones had given us the ability to get to ‘know’ someone long before they ever had to pick a restaurant or open your car door - our screens giving us the illusion that we could bravely dive into deep conversations digitally, long before we’d have the guts to face to face.

Six days deep into texting with Tinder Jake, we both admitted we were surprised. Surprised that we’d been on Tinder too long, in and out of every stereotypical twenty-something relationship, only to enter our 30’s and find what felt like a genuine connection during a global pandemic. 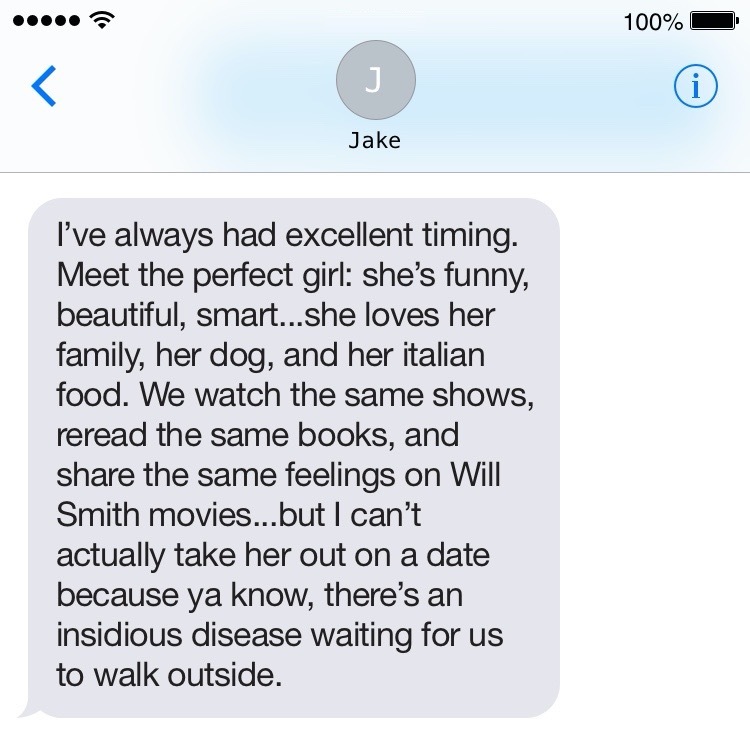 I exhaled air I didn’t know I was holding. We’d been texting till the early hours of the morning for almost a week - was it really enough? With no end in sight, no end game...what were we working towards? Texting towards? Surely we’d be able to meet someday soon...but if politicians and tech titans were still intense debate over opening up the world’s economy, I wasn’t pushing to prioritize a date.

Before I could respond, another text popped up: 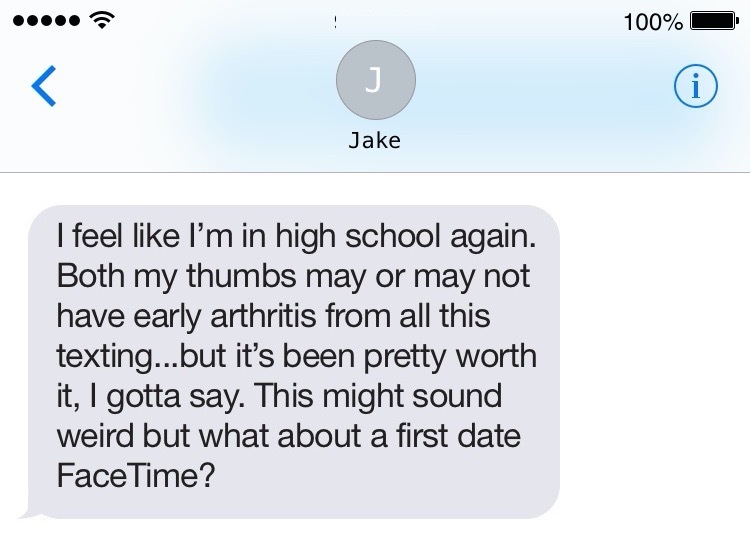 I didn’t give myself a chance to think twice: 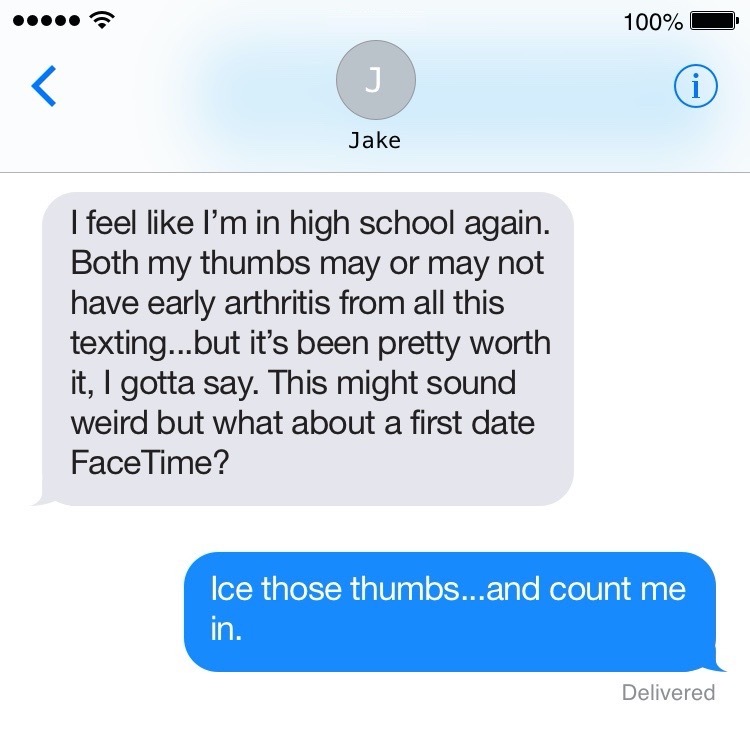 He didn’t seem to need time, either. 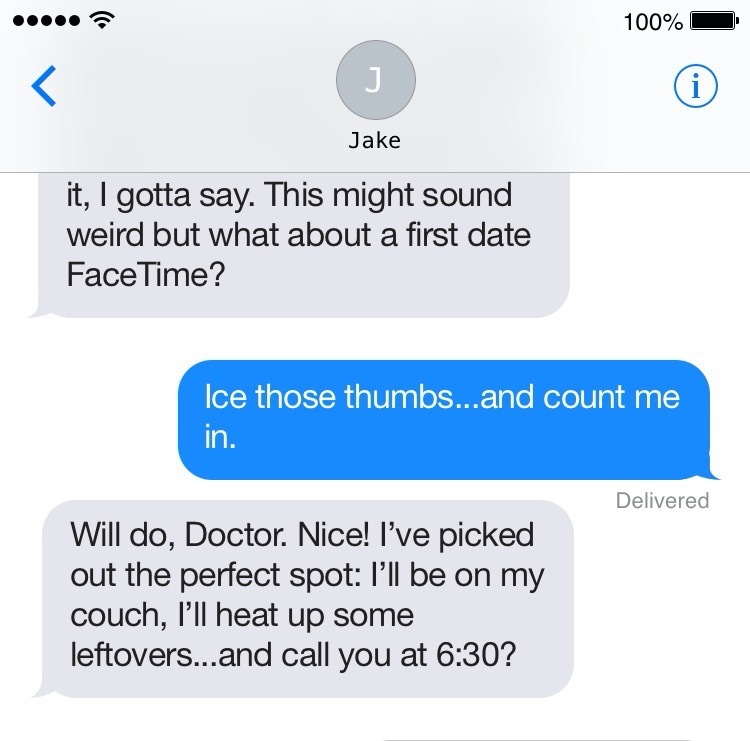 I checked the clock: it’s Tuesday, 1 PM, and I have a hot date tonight. My first, first date in too long. My first FaceTime date, for certain.

With a guy I might already have a serious crush on...thanks to the thousand and one texts we’ve lobbed back and forth like teenagers, during our long-drawn-out days of quarantine.

So that’s how we get here.

To my Zoom confessional with Brigette, Rachel, and Eve. They couldn’t believe I hadn’t told them sooner - insisting that a week in quarantine days was like a two-month relationship in the outside world. I laughed as Rachel had corrected:

“A texting-ship. Come on, come on, keep the details coming and the minute you hang up tonight, you better call us! Or, whatever, if it’s late...text us the eggplant emoji so we know it went well.”

The irony isn’t lost on me. I had tried my hand (and fingers) at dating apps, messaging meetups, the works. I had agonized over profile pictures and bios. I had survived one too many weddings solo, only to hear: “Have you tried Coffee Meets Bagel? My cousin met…” As if I hadn’t downloaded them all! I’d finally convinced myself that maybe I was, dare I say it, superior to dating apps. Sure, my incredible friends and even the most boring coworkers could meet a suitable mate on such apps...but not me. Why not me?

I didn’t know. I did know that I wanted a different love, not DM’s. I wanted the type of feelings that blossomed over easy conversations and no-games communication, the kind of story that started with a meet-cute at a coffee shop or accidental bump in the street.

Turns out...I had no earthly idea what I was talking about. I didn’t need our hands to meet over overpriced lattes, or an accidental sideway spill for sparks to fly. I wasn’t craving a love so deep, dating apps could barely scratch the surface.

I was simply seeking human connection...and turns out, in 2020, in the era of digital dating and global pandemics, I could find that on my iPhone.

So, here I am, digitally dating in the age of COVID-19.

Our date is in an hour. Our very first FaceTime. We might flop. He might have a weird mouth or think I’m totally tragic looking. We might have some fun FaceTimes and fill our quarantine hours with texts...only to come out of this thing with a fun story to tell our friends: “Remember that guy I literally talked to nonstop that one time, when the world felt like it was ending?”

Who knows. We might just have a cute story to tell our kids someday. “When your Mom messaged me back on Tinder during the COVID-19 outbreak....I just knew.”

Either way, I’m willing to take a chance. After all, I hear there’s some good guys on Coffee Meets Bagel. 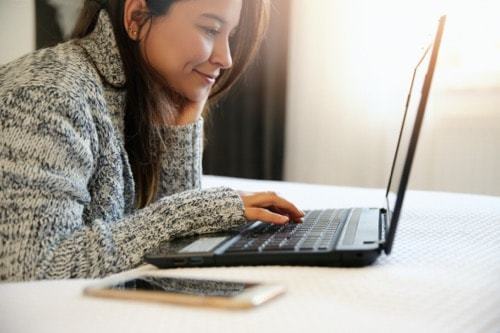