You are here:  Home > Blog > How Keepster Helped Me Find a Birthday Gift for a Friend Who Is Like a Brother

The story of two friends and how they memorialized the key messages of their lives in a printed book. 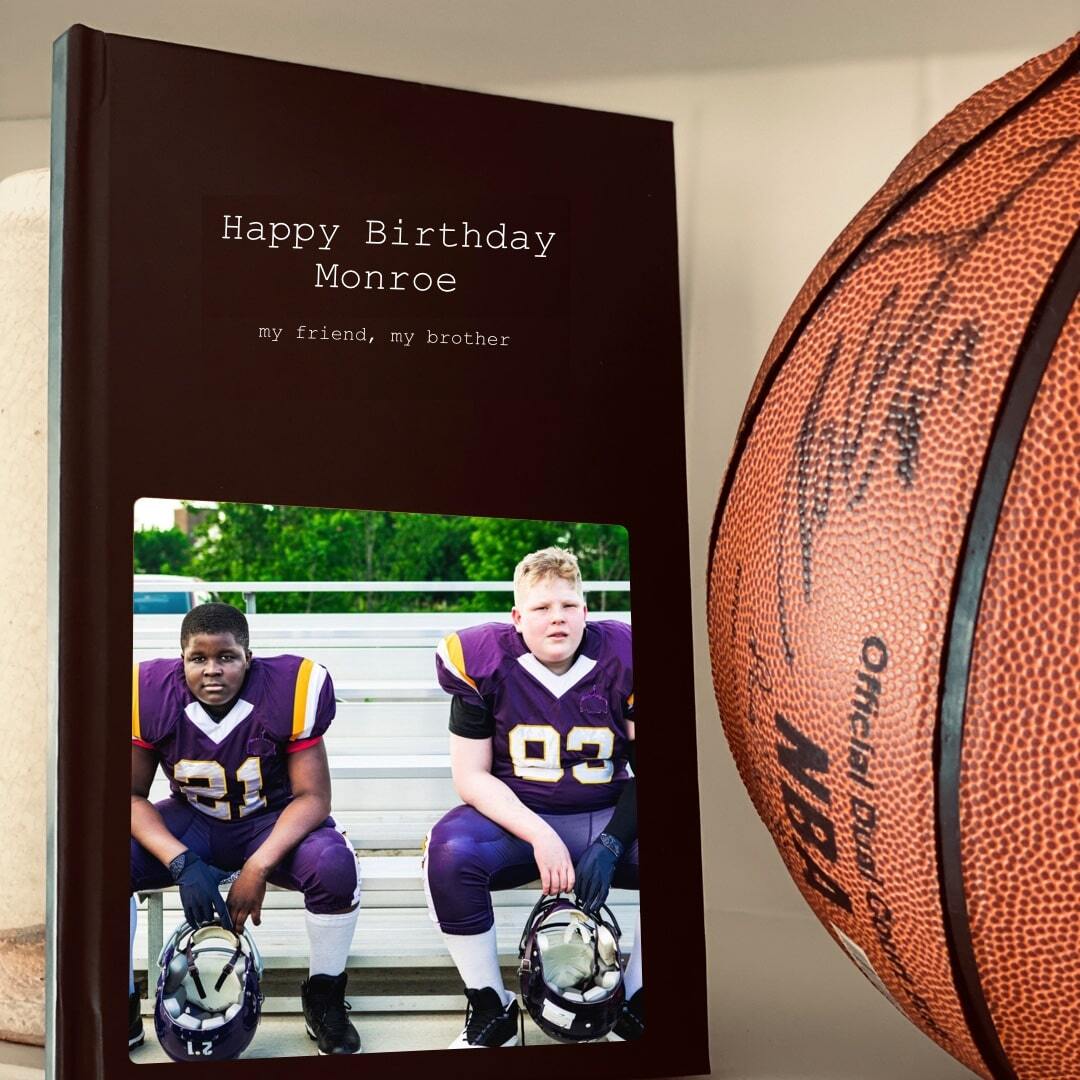 How do you tell a friend how much you appreciate them? How do you say happy birthday and thank you to someone who has seen you through everything, thick and thin? In the movies, you see those cliche clips of the person who becomes the lifelong servant of someone who saved their life. My man Monroe—someone who has been my friend since elementary school—didn’t save my life in the way that you see in the movies. But he is the one who has saved my life in so many other ways—so celebrating his birthday means a lot.

For six months, I’d been pondering what it should be… Then my eyes perked up as soon as I saw an ad for Keepster Message Books.

It was almost 10 years since Monroe and I had become friends and I thought that that milestone, together with his upcoming birthday, deserved a special gift.

I will never forget the day that we first met. My mom insisted I wear this seriously embarrassing t-shirt that belonged to her boyfriend, to a birthday party! Monroe showed up at the same time as me, took one glance, and gave me his sweater so I could cover it before I got inside. When I realized later what the shirt said, I knew that my life at school would’ve been ruined forever if Monroe hadn’t stepped in.
Mom was already not doing well by then.

I still have the texts that me and Monroe exchanged later that day. Although I’ve gotten several new phones since then, I always felt these were the ones that had to be kept because they were from a defining moment in our lives. Now I can memorialize them in the Keepster book that I’ll be making, recording all the times Monroe was there for me in the last ten years. Seriously, I can’t think of a better way to thank him and wish him happy birthday at the same time.

When we met...the story is all right there, in our texts.

Me: No, srsly. That shirt would’ve ruined my school career.

Monroe: Wait. What? How old are you? You don’t have a career.

Monroe: Uhm, yeah. Bad stuff. Who gave it to you, man?

Monroe: That sucks. Hey, you wanna sleepover? I just got Batman Arkham City on Xbox.

Me: I don’t play video games.

Monroe: WHAT! I’M COMING TO GET YOU RIGHT NOW AND SAVING YOU FROM SELF-IMPOSED DRUDGERY!

We played until four in the morning. Monroe passed out first at about 3:00 AM but I just kept ongoing.

How the football obsession began

Monroe: Wanna try out for the football team?

Me: Didn’t you read the last msg, dude? You know I don’t play football. I could get hurt.

Me: That was low.

I ended up falling deeply in love with the game. When my mother finally passed when I was 15, football kept me sane. By then, I was playing full tackle, and the coaches already had their eyes on me for varsity when I came of age.

Me: Thanks for having me come over.

Monroe: Of course. You’re a brother to me.

Me: Don’t know what I’m gonna do now that she’s gone. My dad’s always traveling. He can’t take care of me!

Monroe: Stay with us. My mom said so already. They’re gonna try adopt you.

I didn’t reply. I cried—from gratitude and sadness all rolled up into one. It was the most painful and sweetest moment of my life. I got to Monroe’s place ten minutes later.  He hugged me and never left my side for the next two weeks.

He saved my life.

💔😭
The first girl I fell in love with was someone by the name of Susan McLaughlin. Looking back at it, it definitely was not love, much more teenage infatuation. I was 16. She was 17. This wasn’t Susan’s first rodeo, I would discover later.

It turned out that Susan’s “real” boyfriend was a 19-year-old by the name of Jordan “Crusher” Bogan. He rode a Honda VTX 1800, a beast of a red motorcycle with flame-style swirls designed on it. You could feel the cruiser bike’s roar a mile down the road as “Crusher” made his way to the school one day to pick Susan up to go do whatever 19-year-olds on crazy motorbikes go do with pretty 17-year-old high school girls.

I didn’t stand a chance. “Crusher” had crushed me.
By the time the shock wore off—I hadn’t known about Susan’s relationship until that fateful “Marlon Brando in The Wild One” moment rolled by before the entire school—I was sitting in some hidden alley, ass on the dirty ground, moping.

Monroe: Yo, we got practice. Where are you?

Monroe: Stop it. If you’re moping about Susan, you’re an idiot. Take it as a lesson about being blinded by love.
Monroe: Everyone knew except you.
Monroe: Now, get your butt over here!

Me: You KNEW and you didn’t tell me?

Monroe: Of course I told you! “She’s dating someone else, Kev.” I actually said that. I texted it! And you said? What did you say, Kev?

Monroe: My ass, you don’t remember. What did you say?

By now, I was starting to laugh, seeing how blind I had been:

So many good times

And there was more. So much more. I never did get adopted by his folks. My dad quit his job for one that allowed him to be home and take care of me.

2020 was a rough year. I got lazy, so did Monroe. Lockdowns weren’t good for our physiques.

But we rolled into the 2021 football season with our heads held high and grateful that the world was emerging from something worse than a broken heart and a tragic personal loss.

I have texts of all of that, too. And they’re all in the Keepster Message Book that I made for Monroe.

As guys we don't talk about our feelings much, or about how much our friendship means, But I know for sure that not only is this one great birthday gift, but it also memorializes the best and worst of the last ten years that I’ve been through with my closest friend, my ‘brother’ Monroe.